DOI for
The MIMIC Database:

The new PhysioNet website is available at: https://physionet.org. We welcome your feedback.

The database described below was the product of our first attempt (1992-1999) to build a collection of multi-parameter recordings of ICU patients. We learned a lot from this project, and have been able to do much more in the MIMIC project (2001-present), particularly in collection of clinical data. The MIMIC-II Database and the MIMIC-III Database are many times the size of the original MIMIC Database.

This PhysioBank database contains 72 complete records together with periodic measurements ("numerics") for all 121 records of MIMIC, including multiple recordings of some of the 90 subjects. The lengths of these records vary, but average about 40 hours each. The PhysioNet core collection includes records 037, 039, and 041, as well as the numerics for all 121 records; the other available records are available from the master PhysioNet server and from some mirrors.

This database is described in

Please cite this publication when referencing this material, and also include the standard citation for PhysioNet: 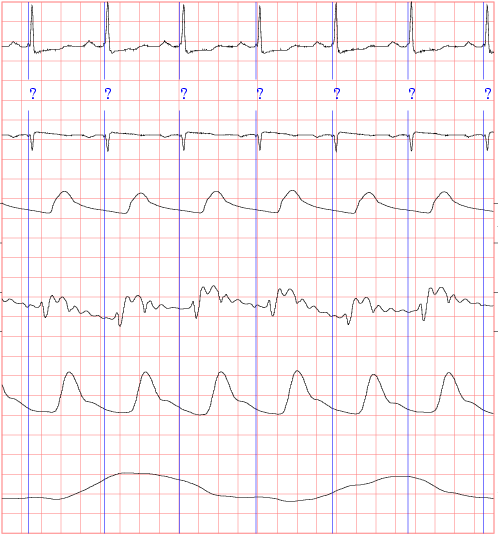 The MIMIC Database includes data recorded from over 90 ICU patients. The data in each case include signals and periodic measurements obtained from a bedside monitor as well as clinical data obtained from the patient's medical record. The recordings vary in length; almost all of them are at least 20 hours, and many are 40 hours or more. In all, the database contains nearly 200 patient-days of real-time signals and accompanying data.

Each record typically consists of several hundred individual files. The data obtained from the bedside monitors are divided into files each containing 10 minutes of recorded signals, which can then be assembled without gaps to form a continuous recording. For this reason, each record is kept in a separate directory, named after the record it contains. Follow the links below to reach the data files.

Note that there are several annotation sets associated with most MIMIC Database records. These include qrs (ECG beat labels, all beats labelled normal) for all records; al (annotations for alarms related to changes in the patient's status) and in (annotations related to changes in the functioning of the monitor) for all records after 055; and abp (arterial blood pressure), pap (pulmonary arterial pressure), cvp (central venous pressure), and ple (fingertip plethysmograph) annotations for those records in which the corresponding signals are available.

For further information about the MIMIC Database, see Moody GB, Mark RG, A Database to Support Development and Evaluation of Intelligent Intensive Care Monitoring, Computers in Cardiology 1996; 657-660. The software used to record the data contained in the MIMIC Database is available here.

The periodic measurements ("numerics") for the entire MIMIC Database (121 records, including multiple recordings of some subjects) are available here.

Since each MIMIC Database record is stored in its own directory (which has the same base name as the record), you will need to use a special format for the record names if you use PhysioToolkit software to read these data directly from the PhysioNet web server. For example, to read the alarm annotations for record 411, use a command such as

Note that 411 appears twice in this command, first to specify a directory, and again to specify the base record name.

An index of the MIMIC Database, indicating the clinical class of each subject, and the duration and contents of each record, is available here.